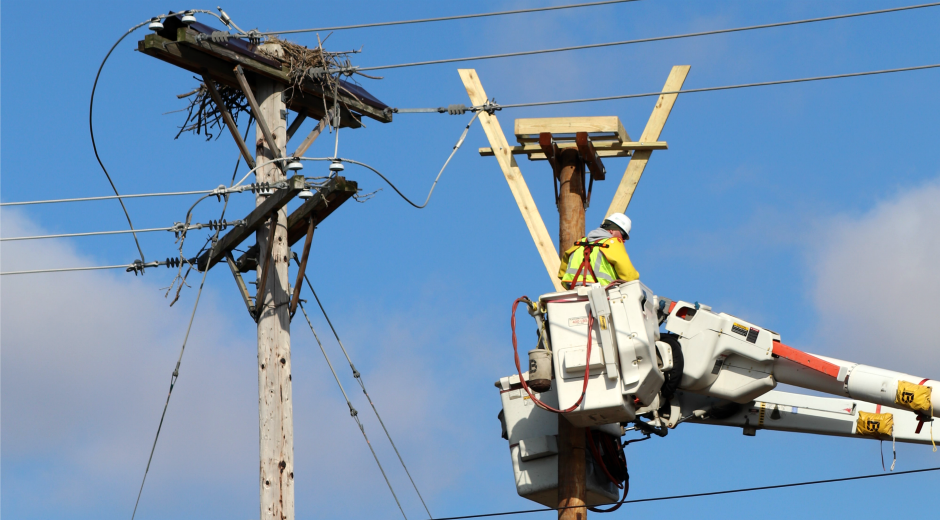 NEW CASTLE, Pa., Feb. 21, 2020 -- As part of its ongoing efforts to protect nesting birds and prevent power outages, The Pennsylvania Power Company (Penn Power), a subsidiary of FirstEnergy Corp. (NYSE: FE), partnered with the Erie Bird Observatory to install two 55-foot wooden poles with nesting platforms in Mercer and Crawford counties. This proactive work will help prevent electrical service disruptions by discouraging ospreys from nesting on utility poles when they return to the area in the coming weeks.

A $5,000 FirstEnergy Foundation grant was awarded to the Erie Bird Observatory in the fall of 2019 to fund the construction of several nesting platforms across western Pennsylvania. Penn Power partnered with the organization to install the new nesting platforms adjacent to utility poles that have experienced high levels of osprey activity.

"We've experienced a significant spike in the osprey population over recent years, and we anticipate this year will be no different since the birds typically return to the same nesting sites as the year before," said Amy Ruszala, an environmental scientist and avian expert at FirstEnergy. "Our goal is to not only remove unoccupied osprey nests that are situated on our utility poles, but also take action to prevent the birds from making new nests on our equipment this spring."

Birds of prey, like ospreys, often seek out tall structures including electric transmission towers and poles to build their nests, which can measure up to three feet in width. These nesting habits often place the birds near energized electrical equipment – jeopardizing their well-being and potentially causing power outages.

Because ospreys prefer to nest near large bodies of water, the 5-square-foot wooden nesting platforms were installed on top of new wooden poles located near utility poles and electric equipment that previously served as prime real estate for the birds near the Route 18 causeway over the Shenango River Lake.

"We are proud to partner with Penn Power to have these nest structures in place before the ospreys return to the area in late March and take up nesting this spring," said Sarah Sargent, executive director and founder of the Erie Bird Observatory. "Our partnership is a win-win because it helps keep the nesting birds safe and also benefits the electric customers."

Utility personnel also worked closely with FirstEnergy's environmentalists and state wildlife officials to remove nests from substations and transmission towers while the birds were south for the winter. Ospreys are a month away from the onset of their breeding season and will lay their eggs between April and July.

Penn Power is a subsidiary of FirstEnergy and serves more than 160,000 customers in all or parts of Allegheny, Beaver, Butler, Crawford, Lawrence, and Mercer counties in western Pennsylvania. Follow Penn Power on Twitter @Penn_Power, on Facebook at www.facebook.com/PennPower, and online at www.pennpower.com.