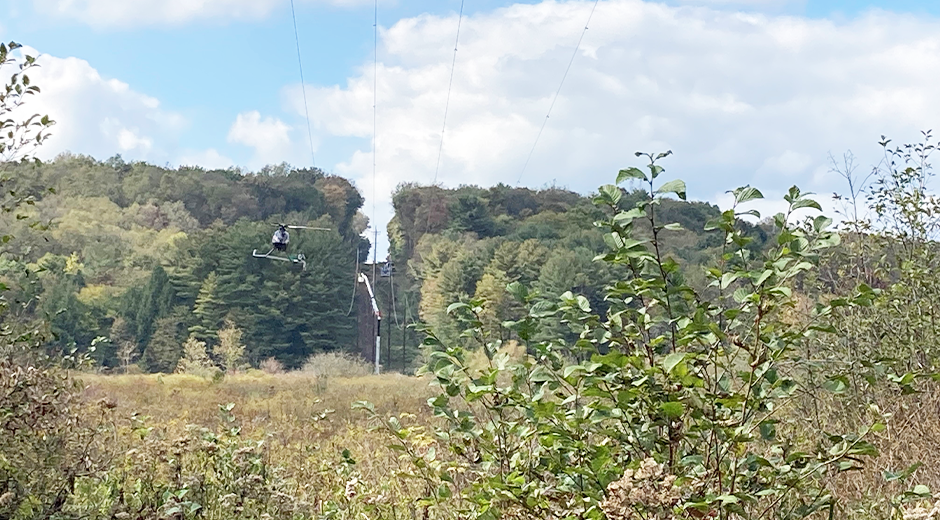 Erie, Pa. – Penelec, a subsidiary of FirstEnergy Corp. (NYSE: FE), has placed markers on a long stretch of power line in the Erie National Wildlife Refuge in Crawford County, Pennsylvania, to help bald eagles avoid in-flight collisions that could cause power outages as they fly between their nest and fishing grounds.

From a hovering helicopter, contractors clipped avian flight diverters every 15 feet along the 1,200-foot span of wire high above a marsh in the Erie National Wildlife Refuge. The triangular flight diverters are brightly colored and reflective, making it easier for eagles to spot the line.

“The biology, behavior and habitat use of raptor species puts them at risk of colliding with transmission and distribution wires,” said Amy Ruszala, an environmental scientist and avian expert at FirstEnergy. “Avian flight diverters provide a thickness to the line that makes it easier for birds to see and avoid. This project is the latest in our ongoing efforts to enhance service reliability for customers while protecting raptors and birds of prey that often live near our electrical equipment.”

Penelec crews installed the flight diverters after first replacing several 50-foot poles with two 120-foot structures where a power line traverses a swampy section of the refuge in Randolph Township. The line, which feeds electricity to the Northwestern Rural Electrical Cooperative (REC) Association’s distribution network, was challenging to repair and maintain because the shorter poles were situated in the water. The new structures were erected at each edge of the swamp to alleviate the challenges associated with the shorter poles.

One of the new structures stands adjacent to a white pine tree, home to a pair of bald eagles that have returned to their massive nest each year since 2014. Penelec crews performed the construction work after nesting season concluded.

Over the past five years, FirstEnergy and its electric companies have completed more than 100 projects to protect birds of prey, like eagles and ospreys. The work includes installing large, wooden nesting platforms or perch arms near electrical equipment where birds prefer to nest or temporarily rest, insulating power lines near perch or nest locations and adding large, bright visual markers on power lines to alert birds to the wires.

Additionally, FirstEnergy has implemented the use of drones to complete bird nest inspections and deployed a mobile app that allows utility personnel to report avian issues in real time. These ongoing efforts have helped utility personnel more efficiently identify and respond to bird activity along power lines to help prevent service disruptions and protect wildlife.

Editor’s Note:  Photos of avian flight diverters being installed by helicopter at the Erie National Wildlife Refuge in Crawford County, Pa. are available on  Flickr.