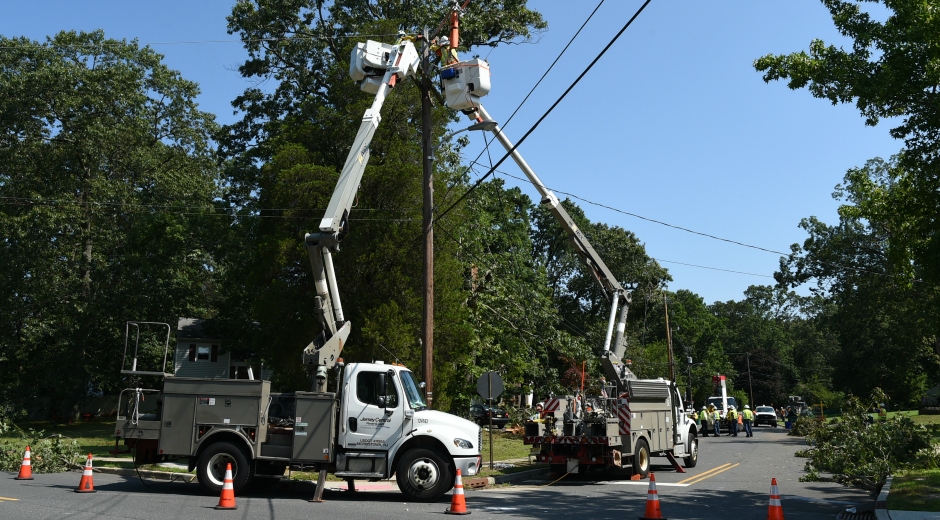 AKRON, Ohio, Jan. 9, 2020 -- For the 14th consecutive year, FirstEnergy Corp. (NYSE: FE) has earned recognition for its emergency response efforts from the Edison Electric Institute (EEI), a leading electric industry organization. FirstEnergy earned the "Emergency Recovery Award" for safely and efficiently restoring service to nearly 280,000 of its New Jersey customers following severe thunderstorms in July of 2019 that impacted the region.

On July 22, a storm with straight-line winds topping 80 miles per hour swept through Jersey Central Power & Light's (JCP&L) service territory, toppling trees, causing extensive equipment damage and closing dozens of roads. A massive restoration effort was launched that ultimately included over 2,300 line workers, hazard responders, damage assessors and other support staff from FirstEnergy companies, contractors, and assisting utilities. Repairs included replacing more than 100 utility poles, 100 transformers and other equipment, and approximately 22 miles of wire. The joint effort restored service to 93 percent of affected customers within 48 hours of the start of the storm, with all affected customers restored by July 25.

"FirstEnergy's work to restore service safely and quickly to customers, often in dangerous conditions, makes them deserving of this award," said EEI President Tom Kuhn. "Their efforts exemplify the high standards our industry seeks to uphold, and I applaud their commitment to their customers."

"When severe weather impacts our region, we have well developed storm restoration plans that are quickly implemented to reduce the outage time our customers might experience," said Sam Belcher, senior vice president of FirstEnergy and president of FirstEnergy Utilities. "This award creates an opportunity to recognize our crews in the field who worked safely around the clock in difficult, and sometimes hazardous, conditions to help our customers."

EEI presents awards twice annually to member companies to recognize extraordinary efforts to restore power or for assisting other electric companies after service disruptions caused by weather conditions and other natural events. Winners are chosen by a panel of judges following an international nomination process. The awards were presented January 8, 2020, during the winter EEI Board of Directors and CEO meeting in Arizona.

EEI is the association that represents all U.S. investor-owned electric companies. Our members provide electricity for 220 million Americans, and operate in all 50 states and the District of Columbia. As a whole, the electric power industry supports more than 7 million jobs in communities across the United States. In addition to our U.S. members, EEI has more than 65 international electric companies as International Members, and hundreds of industry suppliers and related organizations as Associate Members.