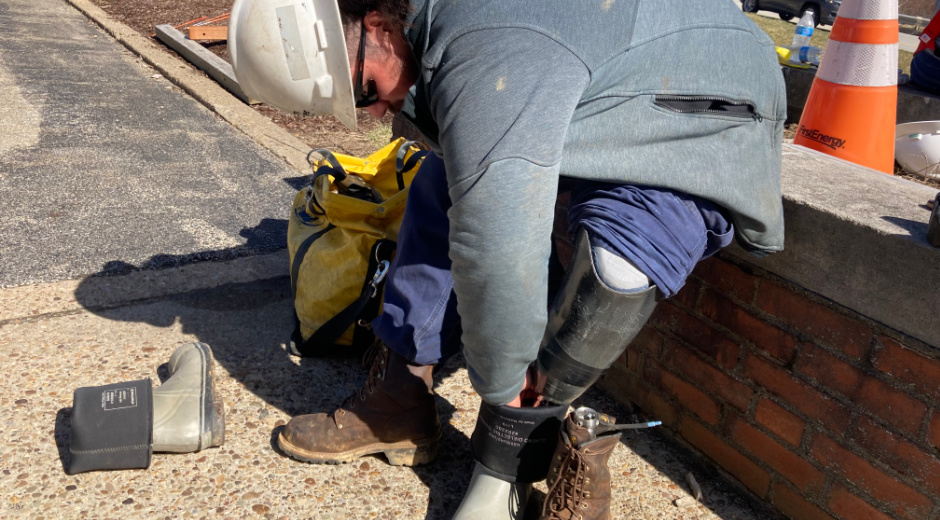 On April 18 each year, the nation comes to together for National Lineman Appreciation Day, a day to show our utmost appreciation for the men and women who work 24/7/365 to keep the power flowing to homes and businesses. Join us in honoring linemen like Jason Tomich, who dedicate their lives to delivering safe and reliable service to customers through sometimes difficult circumstances. Celebrate Lineman Appreciation Day using #thankalineman on social media.

Jason Tomich scales the wooden utility pole with the agility of a wiry sailor ascending a ship’s mast. His sharp spikes dislodge splinters of yellow pine as he climbs.

“Wood chips are fine,” notes the West Penn Power lineman, descending the practice pole outside the Charleroi Service Center. “As long as it’s not chunks.”

Tomich kills time with fellow lineman, Nash Harbaugh, on a chilly March afternoon, awaiting a pair of tryouts for the Power Systems Institute (PSI), FirstEnergy’s award-winning program to train the next generation of line workers. Tomich and Harbaugh are preparing the candidates for their technical evaluations.

No one would blame the men if they took the day off after a long night restoring power to thousands of West Penn Power customers courtesy of an overnight windstorm.

Instead, Tomich and Harbaugh rig a handline on the practice pole for the candidates to hoist a kettlebell weight. To demonstrate strength and control, PSI candidates must raise and lower a wooden crossarm from ground to pole top three consecutive times.

“This thing is really heavy,” Tomich says, lifting the kettlebell. Harbaugh hefts it and agrees it definitely feels heavier than the typical crossarm.

“Linework is my passion,” says Tomich of his willingness to stick around to coach PSI candidates after a 16-hour shift. “And I want it to be their passion.”

Alyssa Imbrogno arrives and pulls her gear bag from the trunk of her car. Tomich helps the 27-year-old pizza shop manager and mother of two secure her red safety harness. The harness attaches to a self-arresting tether system that prevents novice climbers from falling.

Imbrogno previously worked as a flagger, specializing in traffic control around utility work zones along roadways. She recognizes a good career opportunity when she sees one and hopes to be selected for the incoming PSI class.2

“Hold up a minute,” Tomich tells Imbrogno. He sits down on a nearby brick wall. “I need to change my foot.”

Pulling up his left trouser leg, Tomich reveals a short metal prosthetic leg attached to his knee by a hydraulic carbon fiber socket. At the bottom of the metal leg is a foot encased in a leather work boot. He loosens two screws with a torque wrench and swaps out his rigid “climbing” foot for a more shock-absorbent “walking” foot.

“I hate this foot,” Tomich confides, trying in vain to bend his climbing boot between his hands. “No flex. If I wanted to get this foot out of the boot, I’d have to cut it out.”

Surgeons amputated Tomich’s leg below the left knee after a distracted driver struck his motorcycle in September 2017. The devastating injury came just five months after Tomich graduated from PSI.

Tomich spent two and a half years rehabbing and learning to walk independently. Never once did he consider taking an indoor position.

“I can’t sit inside,” Tomich says, swatting away the thought. “I couldn’t do a desk job. I like being outside and active.”

He climbed repeatedly with a buddy and requalified as a lineman.

Watching Tomich scuttle up a pole, there is no hint that he is working with a prosthetic.

“I had to get used to not feeling the spike in the pole with my left foot and leg,” he says.

“The sky is the limit,” says Joe Musco, Tomich ‘s direct supervisor. “Jason can walk through the woods, carry heavy loads. He does everything. We are all very proud of him.”

“Keep those knees away from the pole,” he calls. “And keep your butt out.”

A decade out of high school, Imbrogno says she is more concerned about mastering the classroom curriculum than the physical training.

Harbaugh, who graduated from PSI eight months ago, reassures her that academic support is available. “Don’t worry,” he says. “Once you’re in, you will get plenty of help with challenging classes.”

As Imbrogno climbs, high school senior Paige Sethman shows up for some pointers. Enrolled in utility tech classes for several years, she considers climbing her strength.

“I find it enjoyable and freeing,” she says.

More worrisome for the petite 17-year-old is the crossarm test. Sethman completes one repetition and looks incredulous when told she has two more to go.

Harbaugh shows Sethman how to lower a knee to the ground with each tug. This technique teams body weight with muscle power to complete the exercise.

Musco appreciates the efforts of his linemen to tutor the candidates and understands how important it is to help the recruits. He also knows the two hopefuls will never forget the assistance they received.

“We teach it like the PSI instructors teach it,” Tomich says. “It’s all still fresh in our minds.”