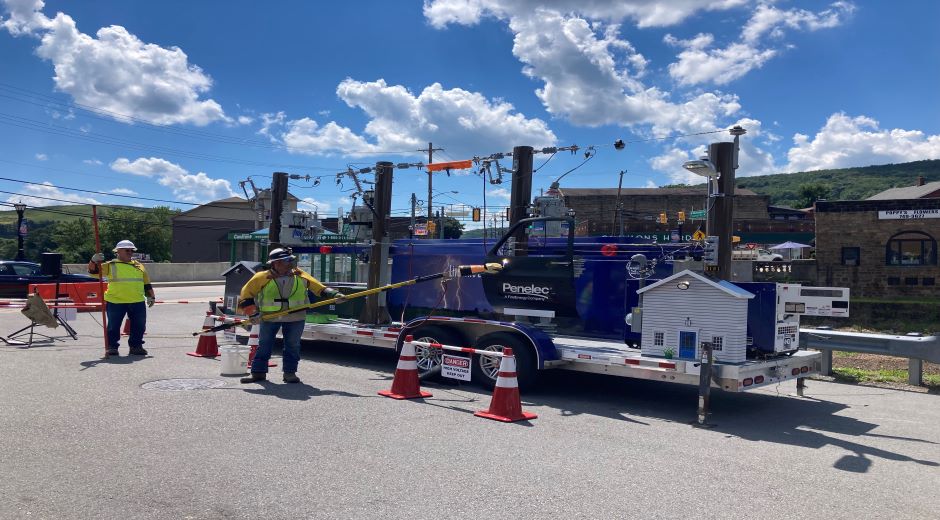 During the presentation, a Penelec employee illustrated a common first-response scenario – live power lines down on a vehicle after an accident – using an insulated pole called a “hot stick” to extend a typical rubber firefighter’s glove onto the handle of an energized car door.

A brilliant blue and orange arc shot from the glove’s fingertip to the metal door with an audible sizzle. The wearer of that glove could have suffered serious, if not fatal, injuries.

This demonstration showed that unlike the rubber gloves and boots used by line workers, those worn by firefighters do not safeguard them from electrical hazards.

“We want you to be the rescuer, not the victim,” stressed Jeremy Tarbay, a Penelec line worker and safety program narrator.

Whenever power lines are down and in contact with a vehicle, first responders must wait until line workers arrive to safely de-energize any live wires.

The hot stick also was used to rest the top of an aluminum ladder against a live wire, creating a fiery flare and instantly transforming the ladder into a deadly conductor. This visual helped drive home the importance of following a few crucial steps to stay safe around overhead power lines, including:

“Thirty feet!” a girl called out.

“That’s right, about the length of a school bus,” said Tarbay, a reminder that summer is nearly over and eliciting a few groans.

Safety trailer demonstrations for first responders are just one part of FirstEnergy’s “Stop. Look. Live.”  safety campaign to help educate the public about staying safe around electricity and near power lines and equipment. The campaign kicked off last fall and features engaging and memorable initiatives to help protect groups that are most at-risk of encountering safety hazards, including first-responder organizations and contractors. The campaign also features an educational program for children. For more safety tips, please visit www.firstenergycorp.com/publicsafety.