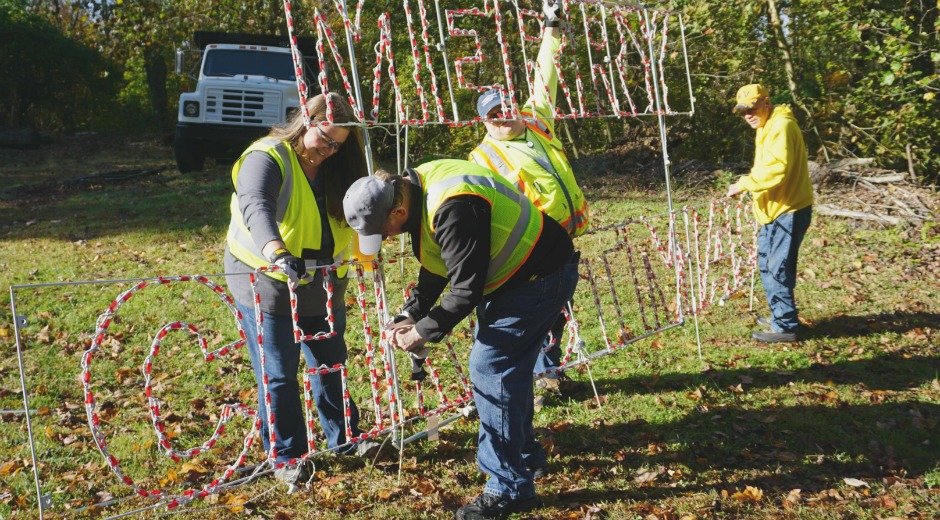 Nearly two decades ago, a few lighted holiday displays were erected at Morris Park in Fairmont, W.Va., to raise money for the United Way. It was called “Light up the Park,” and although the small number of displays didn’t quite illuminate the park, it did light the way for what is now known as the “Celebration of Lights” – a project that brings in tens of thousands of dollars for the United Way of Marion and Taylor counties annually.

Over the years, the Celebration of Lights has evolved into one of the Fairmont area’s largest drive-thru holiday events. For $10 a carload, holiday-hungry individuals from all over can cruise through the park and view hundreds of colorful displays.

Jim Chadwell, volunteer with the Rotary Club of South Fairmont – and self-proclaimed chairman of the affair – provided a little history for what is arguably the most anticipated holiday event in the area. “In the beginning, we had about 20 displays powered by gasoline generators chained to trees,” said Chadwell.

Seeing the potential for raising much more than the initial few thousand dollars, organizers realized the event had room to grow. So, after a few dark years, the South Fairmont Rotary stepped in and chaired the display in 2008.

Since then, Rotary members have managed the project with the help of the local United Way agencies and two large corporate sponsors, the biggest being Mon Power. “They’ve always given two or three work-party days … with anywhere between 10 and 25 people showing up,” Chadwell said. “It’s been real integral to the project.” Mon Power also helps with the more hard-to-reach displays by sending in a bucket truck and a couple of line workers.

Mon Power’s Stephanie Mezzapelle has donated her time every year, helping her coworkers bring the displays out of storage, assemble them and place the decorations around the park. “We’re always eager to help with this project.” said Mezzapelle. “It’s our unofficial kick-off to the holiday season, and it feels good to be part of something that does so much good for the community.”

The Celebration of Lights has consistently increased the amount of money raised each year – from $5,000 the first year to an impressive $62,500 in 2018. Initially, most of the donations were made through the sponsoring of the displays, but now the park is full, and organizers have had to come up with more inventive ways to increase donations – like “Market in the Park.”

On opening day (Nov. 16), Market in the Park enables visitors to be shuttled to the park from a nearby parking lot and allows them to walk the lighted trail and shop among many Christmas vendors while enjoying cuisine and beverages from several food trucks. “Last year, we had 2,000 people show up! We thought we’d have 600,” laughed Chadwell. “It was a mess, but it was great.” There is also the “Reindeer Run” which is 5k walk/run sanctioned-timed event to help raise even more money for the project.

The Celebration of Lights is the largest single project for the United Way of Marion and Taylor Counties, and it draws people from all over. According to Chadwell, last year more than 6,000 cars took the ride around the park and more than 600 of those came from out-of-state. He’s amazed at what this event has become and is proud to be part of it. “We did it to raise money for the United Way, but we really love the side effect, too. It’s a destination.”

If you’re interested in visiting Morris Park this year to help the United Way and enjoy the sights, visit www.celebrationoflightswv.com.